“The cultural role of a city results from the fact that the city is a medium. It is a place governed by norms, rules and cultures, enabling heterogeneous people to live together.” (p.8)

“The spatial order of an urban settlement is not only a geographical order, but also an order of communication and representation. The city exists as a complex of the social medium, which is spatial, communicative and representative. To dwell in such a milieu is, on the one hand, to live in the corporeality of the spatial world, and, on the other hand, to live in the world of meanings that are transmitted by the social media, which construct the urban environment. In this sense, the city matches perfectly the term “media”, as the plural of “medium”.” (p.9)

“…as Choay (1969) argued, in most pre-modern (pre-industrial) cities, elements of the urban environment were interrelated in the context of normative codes and rules, which in turn were acknowledged by inhabitants and planners, and were also connected with all other social systems, such as political power, knowledge, economy, and religion. It seems, then, that cities may be regarded as systems of communication and information, in other words as “semiotic systems”.” (p.10)

“Cyberspace and the cybercity are a “mirror” that projects the negatives of the physical or real city, because they are created as a result of needs and desires that have grown from a lack or dissatisfaction regarding physical or real cities and society.” (p.14)

“Doreen Massey describes cities as ‘the intersections of multiple narratives’, a nexus of distinctive and coexisting stories.” (p.1)

“…from the beginning of the century… The metropolis was thought to be without balance and harmony, a landscape of physical and psychic extremes in which the modern citizen was subjected to the mayhem of the city’s ungoverned, shapeless sprawl, or to the tedium of its unrelieved sameness. Either way, the metropolis appeared to spell the end of community. Both the imagined national and collective class communities were in a sense defined by these conditions but constituted themselves outside and against them.
At least one further kind of community of a different type did emerge from within these conditions, however: the artistic community comprised of a temporary and fragile alliance of emigres who, as Williams puts it elsewhere, shared the medium of their art and the divergent project we have come to know as modernism. The artistic medium, which centrally held their interest, was reworked to express an altered mentality and simultaneously register the time of a new modernity. For if realism was the representational mode of the earlier type of community and experience of synchronous time, new modes were required to capture the experience of the anonymous crowd and multiple times of the metropolitan scene.” (p.18)

“But if community depends on sameness, what, in a world of mobile peoples and circulating commodities, where local, national and global intersect, remains the same?” (p.22)

“Certain key and recurrent terms […] – estrangement, collage, hybridity, syncretism – begin to offer a common vocabulary for reflexive modern and postcolonial communities and for the mixed discourses of a reflexive aesthetic.” (p.23)

“Only somebody who has lived in the streets of a city, suffering some kind of misery, can be aware of what the paving stones, the doorways, the bricks, the windows signify. At street level – outside a vehicle – all modern cities are violent and tragic. The violence of which the media and police reports speak so much, is partly a reflection of this more continuous but unregarded and older violence. The violence of the daily necessity of the streets – of which the traffic is a symbolic expression – to obliterate (run over) even the recent history of those who have lived and live in them.” (p.96)

“Initially [Ralph] Fasanella’s paintings of Manhattan do not appear in the least tragic. And this is the first way in which they are accurate. Because tragedy, too be felt aas such, requires a temporary exemption from daily life – a compassionate leave – which the modern city does not grant.

His paintings are accurate in many ways. There’s the typical sky of New York, very high and distant and yet its light indistinguishable from that reflected off the waters from the Bay, [….] Or the specific way in which the density of the working population makes itself felt there. The island of Manhattan is a gigantic metaphoric model of the compression of an immigrant ship that has moored and [-p.97] never left.” (pp.96-97)

“A modern city, however, is not only a place, it is also in itself, long before it is painted, a series of images, a circuit of messages. A city teaches and conditions by its appearances, its facades and its plan. No city more dramatically than New York which served for at least fifty years (1870-1924) as a unique landing-stage and breaking-in ground for millions of immigrants who had come from distant villages or ghettoes or small towns.
The city demonstrated to the newly arrived what they had [-p.98] to forget and what they had to learn. Nobody planned what New York taught. Its lessons were by example. In being what it was, it laid down its laws. At a profound level, Fasanella’s paintings are about some of the lessons which the look of the city taught as law. 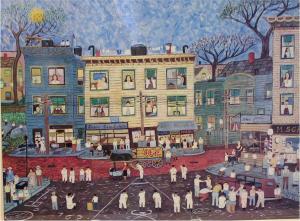 “Objectively space exists in Manhattan. It is a scarce and enormously valuable commodity. Sometimes Fasanella puts up a hoarding which ironically announces: SPACE TO LET. Yet this commodity, this space, is not inhabitable, except in purely physical terms. What has evacuated it? What makes the family kitchen no more than a cupboard off the street?
The answers are not only those which first spring to mind: overcrowding, poverty, insecurity. These phenomena existed in the countryside, yet a peasant house could still remain an enclosure, a refuge. What destroyed, invaded, the interior of the tenement home were even more basic economic processes. The home was not a store: on the contrary, the store was where you had to purchase each day the wherewithal to live. The wherewithal was paid for by so many hours of wage-labour. The time of the city – the time of wage hours – dominated every home. There was no refuge from this time. The home never contained the fruits of labour, a surplus, of either goods or time. Home is no more than a lodging house.” (p.100)

Ref: (italics in original; emphases in blue bold mine) John Berger ‘Ralph Fasanella and the Experience of the City’ pp.96-102 of About Looking, but I didn’t record which edition!

More interesting questions about humans and cities and nature…

“What is the relationship between humans and nature? How does this question play out in the specific micro-environments of cities?” (p.71)

These questions are posed in the context of sustainable urban development, but I think them both interesting and relevant to fictional concerns (perhaps especially those of urban fantasy and fiction more generally?):

“Ultimately,” write, “the green city will reflect a rather different future for work. On this topic there are some very large questions: can a future of cities competing against one another in world markets be reconciled with a benign future for the environment? What are the limits of competition and how can they be enforced? Does economic growth itself have limits? How can growth be steered into environmentally benign forms of production? What forms of governance are required to regulate world markets in order to guarantee social security and environmental conservation? How do culture, place and climate influence work patterns, and consequently the physical accommodation of work?” (p.132)

“…given the task of making budding architects understand that human space cannot be truly measured unless it is oriented in accordance with the cardinal points of the human heart, I had no better allies than Bachelard of La Poétique de l’espace and the Eliade of The Sacred and the Profane.” (p.vii)