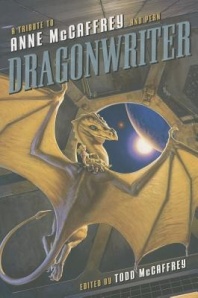 Anyway, as well as this revelation, Jody Lynn Nye and Bill Fawcett have the following thoughts to offer: “…Anne’s stories give the ordinary person a chance to become great. Most fiction focuses only on heroes with extraordinary talents. Among the legion of science fiction readers are scientists, computer programmers, test pilots and astronauts, environmentalists and biologists, yet the great majority are ordinary people – usually more intelligent than the average, but not the geniuses or heroes that are the usual protagonists of novels and movies. On Pern, however, there is a chance for the ordinary man or woman to step forward and be great – anyone can impress a dragon. To do so is also to acquire a lifelong companion who hears only your thoughts and is utterly devoted to you. In this simple relationship, Anne shows an understanding of two longings experienced by many readers: the desire to belong to someone or something) who will give unconditional acceptance and the desire to be given power and responsibility (the care and riding of a dragon) that is at the same time manageable. Anne’s words express thrillingly what it feels like to form that relationship with a dragon, unshakable and unbreakable unto death.
Not only has the ordinary man or woman gained a devoted and powerful friend, but he or she then becomes a member of a support group that cares for dragons and risks their lives with them. We see unconditional acceptance by the community, as well, and they want to be a part of it. Science fiction fans in particular, by virtue of their intelligence and awareness of the isolation that often provokes, long for that inclusion. In Anne’s books, they see a special group to which they can belong. That is an attractive quality that draws those readers back again and again.
Few authors offer a viable social model for the common human being. Anne McCaffrey’s Dragonriders books appeal to a particularly devoted readership partly because of the way these books portray people living on Pern. Though their lives might be lived under harsh, even primitive conditions, the characters are able to survive, thrive, and create. The cultures are so rich in detail that it is possible to reconstruct a semblance of life in Hold, Hall, or Weyr – in ruling and administration, craft guilds, or dragon husbandry, respectively. Life on Pern is hard; characters are always fearing what may fall next from the skies. Yet, those characters live and love, sing, distill wine and spirits, and tell stories, gathering together in groups for mutual support and pleasure, enjoying the homey touches missing from more technology-oriented future sagas.
Like J.R.R Tolkien in the Lord of the Rings saga, Anne scattered songs and poems throughout her books. Music and storytelling run a close second in fans’ hearts to the dragons themselves. From the beginning, the Harper Hall has been the favorite guild, and its longtime guild leader, Masterharper Robinton, a favorite character (especially Jody’s). All of these elements add texture, depth, and color that we drink in along with the adventures and romances. You might exist in the worlds created in some series; you could live on Pern.
Especially when they were first written, Anne’s literature also might have been the first that young women – and men, too – had found in which strong, interesting female protagonists have adventures of their own and are in charge of their own fate. That was a welcome change from most SF of the time, when female characters often seemed to be helpless and stupid, or were depicted as less-effective men with breasts. Not only that, but the cultures from which Anne’s characters spring are cooperative and interactive, values usually associated with women. Anne’s heroes and heroines do not seek solo glory. They know themselves to be part of a greater whole in which every person has his or her role. As Charlotte Moore, longtime track head of the Worlds of Anne McCaffrey at Dragon*Con…, said, “the consistent them in all of [Anne’s] work is the importance of connecting to someone else – human or otherwise – as a means to find one’s self.”” (pp.104-105)